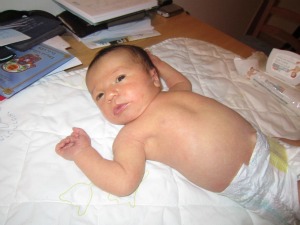 About a year ago I wrote the story of my first birth in your website, it happened two years ago, I gave birth to a healthy 3.9 kg. boy through a c-section.
Last January I got pregnant again, my husband and I didn't expect for this to happen so soon, since our first pregnancy took a while and we just started trying, but it was a really nice surprise.
I am very grateful that the pregnancy went along just fine regarding the baby, I suffered deeply almost every pregnancy symptom in the book, I could say I had a heartburn that lasted for 3 full months!
Anyway, here's where the fun begins: my due date was one day after my first sons' birthday. One day before his birthday, at 5:30 a.m. I went to the bathroom for about the 20th time that morning, and I saw I was releasing a bit of blood, so I woke my husband up, who called my sister (who conveniently happens to live next to us) so she could watch after our son, and we left for the hospital, a little bit excited and a little bit scared. Lucky for us this happened so early in the morning we had no traffic at all, since we live a bit far from the hospital and it can take up to an hour and a half to get there, even more sometimes.
We arrived at the hospital, I was hooked up to the monitor, and when the doctor came I explained why we arrived, and we realized I had no contractions at all, so the doc sent us home, the blood was related to the "mucus plug", which can come out one week, or one hour before labor (now we know). This was at about 9:30 a.m. and rush hour was peaking, so we decided to stay in a mall next to the hospital so we wouldn't be surprised in the middle of the highway.
My husband decided, as a strategy to help me give birth more quickly, that we should walk as much as we can, so we went to every store in the mall, and walked around it and outside of it for the whole day, I can fairly say it was a long time since I had walked that much.
After making a last round in the afternoon, my husband checked how bad traffic was on the highway, and is was getting lighter, so we decided to leave in about half an hour, but at that moment I began to feel contractions. We started timing them, they were about 6 minutes apart, so we sat down to eat something to let things flow. After that we went back to the hospital to see if it would be smarter to stay than to go back home. I was hooked up to the monitor again, but this time I was admitted in, since my first birth was a c-section and I was having contractions doctors didn't want to take any risks.
I was given the choice to have another c-section or to give birth naturally, and I chose the latter, since having another c-section would mean that every birth after that would have to be a c-section also. About at 1:30 a.m. I was transferred to a delivery room, by this time contractions were about 4 minutes apart but they really hurt. I asked for epidural analgesia, which really helped. By this time I had a 2 cm. dilatation, which is almost nothing. I was checked regularly through the night, but with no real improvement. at 9 a.m. on my first sons' 2nd birth day I was in the delivery room with 6 cm. dilatation, when the doc came in, and decided to take manners into his hands, literally, and managed to get me 10 cm. dilated, so at that moment I began officially to give birth.
I began pushing, of course having epidural analgesia makes it really hard to push any muscle, but things started to move forward. While giving birth I realized it's not about the pain, it's about the very big effort, it's tiring, and as much as you push, the baby hardly moves. I pushed and pushed for more than 2 hours, until the baby's head began to appear, but as much as I pushed, it slipped back in. We stopped for a minute, I took a deep deep breath, and gave the push of a lifetime, until the head finally came out, then the nurse did the rest.
It was one of the most exhausting, thrilling, and beautiful experiences of my life, I am very happy I didn't choose the "easy way" having another c-section, and it gave me a healthy 3.7 kg. boy that was born on his big brothers' 2nd birthday, almost on the same hour also.
If there's anything I can recommend other women after having the opportunity to give birth through surgery and naturally, is to avoid surgery, giving birth is a gift, not to mention that recovery is much faster.
Thank you for letting me share my story.
Best regards,
Nurit

Join in and write your own page! It's easy to do. How? Simply click here to return to Your Birth Stories.