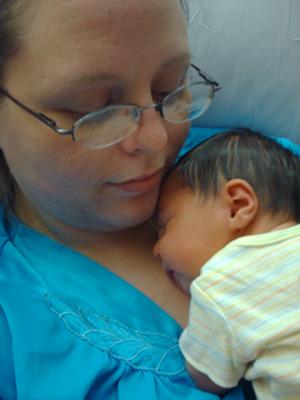 I wanted a completely nn-medicated birth so that Tori wouldn’t be sleepy when she was born and could nurse right away. I ended up having to have a low dose of Statol late in labor, but it was no big deal – she was born in two contractions (yay!). I had them lay her on my chest immediately before they cut the cord to give her a bit more security. I had them clean her up in the hospital room quickly and then give her back to me so that I could initiate breastfeeding right away. Sure enough, just as soon as I presented her with my breast, she latched on like a champ. Because of the Statol she didn’t nurse but a few minutes before falling asleep and I’m not sure she even transferred colostrum – but hey, that was a start.

The third night I thought I would die. I’d latch Tori on, she’d suck for 2 minutes, fall asleep on the breast, I’d transfer her to her crib and just as soon as I did she’d wake up again. It wasn’t so difficult at first but I was wondering if I was starving her, I thought I was a human pacifier, and frankly latching and unlatching her repeatedly made my nipples worse. If I had it to do all over again I would have left her attached on each breast a lot longer and avoided so much the latching/unlatching dance. This is because through the near-constant stimulation, she was working to bring my milk. The next morning when I got out of the hospital my milk came in.

About 10 days in we were getting a lot faster at latching but my nipples were still *killing* me. My MIL told me to pick up Neosporin Pain. I’d apply it after each nursing session and (gently) wipe it off before she latched on again. It was a life saver. By three weeks my nipples were completely healed and we were nursing comfortably.

We made the mistake of offering Tori a paci when she was a few weeks old because she was nursing all the time. Literally. She’d be on for 45 minutes, I’d put her down to sleep, and 15 minutes later she’d want to come back. Repeat. We tried to give her a paci just to give me a break. That was a bad idea. Because babies suck on a paci differently than they do the breast, it completely messed up her latch. If I had this to do all over again I would baby-wear so I could continue to do (whatever) hands free and Tori could nurse, or comfort suck, or anything she wanted to do.

After the paci snafu it took 3-4 days to correct her latch. By that time the growth spurt was over and she was sleeping a more predictable 1-2 hours between feedings but somehow we developed thrush. It felt like a lifetime before we completely cured her of her thrush. Then, suddenly (and too soon), Tori was six weeks old and I was looking at having to return to work in two more weeks.

I started pumping in hopes that I could build up her first day’s supply before going to work. I screwed this all up and, long story short, I ended up giving her all the milk I’d pumped from a bottle almost as soon as I pumped it. I tricked myself into thinking I had a milk supply problem because I couldn’t get ahead of myself. I did NOT.

When Tori turned 8 weeks old, I went to work for the first day and got a frantic call from Josh about 10 am. Tori wouldn’t drink any of the milk I’d frozen for her. I made an emergency trip home with what milk I’d collected that morning and she drank it no problem – I wondered what the issue was since she was taking a bottle no problems before. Turns out I had a problem with lipase (more about that next paragraph). We had to overcome that issue. Then a week later I got Mirena inserted because doc advised me that it was a great long-term birth control and because it very rarely affected milk supply. Within two weeks of getting Mirena my milk supply really did plummet (which I should have known – I’ve always been *extremely* sensitive to hormonal forms of birth control; if you aren’t sensitive don’t worry – but if you are sensitive, any form of hormonal birth control can completely screw with your supply). Then I started taking *more* meds to increase my production.

I had only been back to work for a week or week and a half when Tori started refusing the breast whenever I was home to offer it to her. Tori learned very quickly that bottles were easier to drink from. In offering her the bottles too early (and too consistently), I also created a bigger problem that I came to deeply regret. I’d created nipple confusion (or, more accurately, nipple preference.) I’d put her to breast and she’d scream and kick and cry (so would I). I felt so rejected. When I tried to work her out of this nursing strike, she’d strangle from an overactive letdown I had created with all the milk production meds, get more frustrated, and then she couldn’t be coaxed back to breast for the rest of the night. If I had this to do all over again, I’d wait until it was *necessary* to introduce the bottle to her and I’d limit her time on the bottle, meaning I’d run home from work on lunch and nurse, nurse before work, directly after work, etc. so that she’d have as few bottles as possible.

The only relief I had from her nursing strike was at night. We bed-share, and, while she was asleep / too tired to fight she’d roll over to me and dream-feed. That’s the only thing that kept my milk production up long-term because after using the production meds so long (and not knowing that was causing my daughter to drown!), I’d messed with my breasts’ idea of what kind of supply they should have, the meds lost their efficacy, Tori wasn’t nursing *enough*, and, my breasts gave up and my supply crashed for the worst. On her three-month birthday Josh and I had to start supplementing with formula.

That lays out the song and dance until she turned one. I stopped pumping at work but she continued dream feeding at night. Within two months she gently weaned herself – going from two nursing sessions a night to just one, and finally in October, at fourteen months old (exactly) she nursed the last time. I tried offering the breast at night for a few weeks since then but she didn’t want it anymore – just her paci. (Insert sad-face here).

All told, my beautiful daughter was exclusively breastfed due to my crazy pumping schedule for the first three months of her life. She was supplemented with roughly 25% formula until six months old. Past that she received 50-75% formula . . . but . . . I never gave up. I gave her every ounce of Mama milk I could until she was a year old. I must say I’m quite nostalgic about our breastfeeding relationship and the hours I spent on the breast pump. I’m also proud of what we accomplished together – but I admit I’m filled with a little regret. If I’d known then what I know now every step of the way, I could have avoided a lot of the boobie traps placed in my way.

That’s precisely why I’m trying to assist any mothers expressing interest in breastfeeding with my new blog series. I hope that the moms I’m helping can overcome any obstacles and breastfeed for as long as they, and their little bundles of joy, wish.