Two babies in 2 years, Amiodarone, Travel, but still did it! 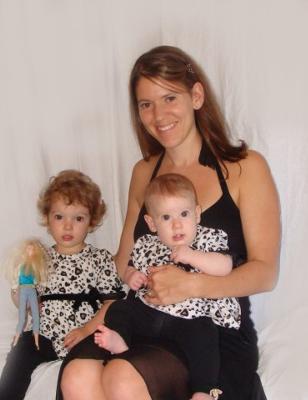 My Daughters and I

I was pregnant with my first daughter in 2008. I knew I wanted to breastfeed even before I was pregnant. My mom breastfed my sisters and I. I really saw no other option. So, shortly after I became pregnant, I invested the 250 dollars to get a Medela Pump. I knew I would have to go back to work, and I was determined not to let that get in the way of successfully breastfeeding.

While I was pregnant with Alex, my oldest, we found out she had an irregular heart beat. It was supra ventricular tachycardia. This is where her heart was racing at about 240 beats per minute. To treat this, I had to take a number of medications to get it under control, including digoxin and amiodarone. I took the amiodarone for a total of about 1 or 2 months and stopped it about a month before I had Alex.

One day I received a surprising email from a lactation consultant at Children's Hospital in Milwaukee (where I would deliver due to the wonderful cardiology staff there). She advised me that since I had taken amiodarone, I would not be allowed to breastfeed. WHAT?! OH MY GOD. After spending nights and nights in the hospital and having to deal with the stress of knowing my child had a heart condition, now THIS?! Breastfeeding was going to be the one GOOD thing I could do for this poor little baby. I was so upset, I could barely contain myself. No one else, except my mom, really understood why I was so upset.

So I immediately forwarded this email to our wonderful Pediatric Cardiologist, Dr. Janette Strausberger. She has had a lot of experience with mothers who have taken amiodarone for a transient period while pregnant. Although, when amiodarone is prescribed for a mother's heart condition, she is typically on it for a long time. Amiodarone stores in the fat, and is in the body for a long time, even after you stop taking it. Dr. Strasburger believed that since I was only on it for a short period of time, I should be able to breastfeed without any problems. We could even do a test on the breast milk to check the levels. I could not thank her enough. She was dissapointed in the lactation consultant giving me this information without knowing her facts, as was I.

Alex was born 9/22/2008. What a beautiful little girl. The ICU team scooped her from me almost immediately to take her down to ICU and hook her up to monitors. I suffered from a lot of bleeding, so I was stuck in the OB suite. I urged my husband to go to the ICU to be with her and to let the staff know that she would be breastfed, do not give her any bottles.

Time passed, I think about 2 hours. I was so upset because I know you can breastfeed right away and this is good for the baby, but they wouldn't let me go down until they thought I was ready. "Forget about me, what about my baby!!", is what I was thinking. They finally let me go down.

I talked with the ICU nurse. I told her the baby would be breastfed. She plainly said, "how do you expect to be able to do that? What are you going to supplement with?" I thought, "what on earth is she talking about????". I later realized that most of the babies in the ICU are terribly sick and are there for a long time. It is difficult for mothers to solely breastfeed these babies.

Well, my baby isn't sick, and she isn't going to be here forever. I am going to breastfeed her. So I tried. I had no idea what I was doing. It was so difficult for her to latch on. I luckily was blessed with a different ICU nurse who was more knowledgeable on breastfeeding and helped me. They also got a lactation consultant down to help.

I was SOOO tired. The baby had to stay in ICU, and my room was like a mile away. So, every 1-2 hours, I had to go down to her room to feed her. It was the single most exhausting experience of my life. But, I did it. She learned how to feed like a champ. It took a couple of weeks for both of us to get the hang of it.

I introduced the bottle (of breast milk) at about 5 weeks. She took it perfectly. This allowed me to go back to work a couple of weeks later. I was actually heartbroken to see her drinking from a bottle. Like she didn't need me anymore!!

I breastfed Alex until she was 10.5 months old. I got pregnant with Izzy when Alex was 9 months old, and I was so utterly exhausted and my milk supply was diminishing, so I decided to switch her to formula. She did well with the transition.

Izzy was born March 31, 2010. What a difference. Izzy was delivered at our local hospital, and the nurses were wonderful. Within minutes of her delivery (completely natural, no DRUGS!), she latched on. Wow. It was awesome.

I introduced her bottle around 6 or 7 weeks, because I remembered the feeling of helplessness when Alex took the bottle for the first time. Well, Izzy didn't like it! She gagged. She did not want any part of a fake nipple. The trouble I had was that I was traveling to Virginia in a couple of weeks for my friend's wedding. Maybe I would need to take Izzy with!

After several attempts by grama, me, and daddy, she finally took to the bottle. While I was in Virginia, I refused to let this stop my supply. So, I pumped and pumped and pumped, every chance I got to keep my supply up. My friends probably thought I was nuts going up to the room so often to pump. But, it worked, and I came back and we started where we left off.

Izzy is now 10 months old. She is still not sleeping through the night, and again, the exhaustion is setting in. I am temped to wean, but not sure if we are ready for that yet.

I am so glad that, even though times were tough, I stayed determined for my babies. They are so healthy, rarely get any sort of colds or infections. I give the credit to the breast milk! Thanks for listening to my story. I would be happy to talk to any other moms! We all need support, and I don't care if it is in 10 yrs from now, please email me if you want! :) All of my contact info is here: Jackie Gauthier, PA-C, MMS, Independent Beachbody Coach